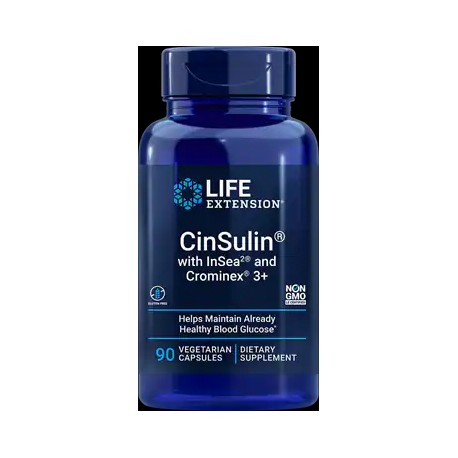 High blood sugar is implicated in the development of numerous health problems. New studies reveal that even active, health-conscious adults can experience higher than desired blood sugar levels as they age. In addition to a proper diet and regular exercise, certain minerals and plant-based nutrients can help support healthy blood sugar levels in aging adults. Chief among these are pharmaceutical extracts found in cinnamon and a new form of chromium.

Enhanced CinSulin with InSea2 combines concentrated amounts of the following bioactive compounds in one convenient formula:

CinSulin® — Scientists worldwide are excited over the clinically proven power of a novel form of cinnamon to support healthy glucose metabolism. Scientists at the US Department of Agriculture have been quietly studying it for more than a decade. Government experts have been amazed by compelling in vitro results documenting its ability to induce a twenty-fold increase in sugar metabolism.

Chromium is a critical cofactor for glucose control, helping to transport blood sugar (glucose) into cells, and thereby supporting already-normal insulin action. Crominex® 3+ — Long known for its role in maintaining healthy glucose metabolism, chromium has been optimized with standardized extract of Indian gooseberry and a proprietary form of the adaptogen shilajit. The name of this most advanced chromium complex is Crominex® 3+. The Crominex® 3+ complex helps support:

Combined with CinSulin® and InSea2™, the result is an unrivalled formula that affords optimal support for healthy glucose metabolism in aging individuals.

InSea2™ — Researchers have known of the many health benefits of seaweed extracts for years. Only recently has it come to light that a proprietary form of seaweed extract called InSea2™ blocks the action of glucosidase and amylase — enzymes your body uses to break down carbohydrates into glucose, facilitating its transport into the bloodstream. Derived from brown seaweed and bladderwrack, a single 500 mg dose of this proprietary compound triggered a 48.3% decline in after-meal blood sugar spikes in a recent double-blind, placebo controlled trial.

Studies in humans have proven equally impressive. In a recent double-blind, placebo-controlled clinical trial,4 a group of maturing individuals (average age 61) taking 500 mg per day of the cinnamon extract contained in this CinSulin® formula experienced an average decline of 12 mg/dL in fasting blood glucose after only two months. This novel cinnamon extract also produced a significant decrease in after-meal glucose spikes (an average of 32 mg/dL) after ingestion of 75 g of carbohydrates!

Take one capsule 20-30 minutes before each meal not exceeding three (3) capsules daily, or as recommended by a healthcare practitioner.

Best results are achieved by taking this product along with maintaining a proper diet and regular exercise.

Always check with your doctor before taking this product and test blood sugar regularly, especially if you are currently using anti-hyperglycemic medications.

To be determined Shipping
$0.00 Total

Product successfully added to your shopping cart
Quantity
Total
There are 0 items in your cart. There is 1 item in your cart.
Total products
Total shipping  To be determined
Total
Continue shopping Proceed to checkout
We do NOT use cookies. Visit our Privacy Policy for more information on our data collection practices.