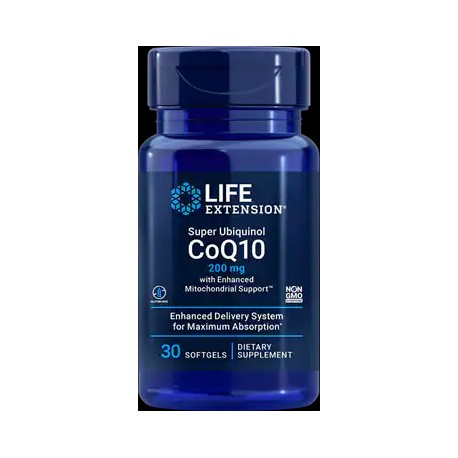 Coenzyme Q 10 is a naturally occurring molecule that resembles the chemical strucuture of Vitamin K. It is present in every cell of the body as it is the key element in the cell's energy supply. Food we eat is converted into an energy form called ATP with the help of Coenzyme Q 10. The body's storage of ATP is very limited and it must be synthesized continually to insure optimum functioning of all cells and organs. The richest source of Coenzyme Q 10 is beef heart. The expense of extracting it from beef heart though is too prohibitive for general use. The Japanese discovered a way of producing it by fermentation process making it abundant.
Clinical studies were done in conditions of heart disease, periodontal disease, Diabetes Mellitus and obesity. In the impaired heart, an optimum supply of energy to every cell is essential. 50 to 75 % of patients with heart disease studied had an insufficient supply of Coenzyme Q 10; when they were given supplemental Coenzyme Q 10, lesions grew smaller and the pumping action improved. Patients with Angina Pectoris had less frequent attacks and patients with congestive heart failure had less chest congestion and could increase their physical activity. Studies in patients with gum disease showed that 60 to 95 % had a deficiency of Coenzyme Q 10 in their gum tissue. 86 % of them also had a deficiency measured in their white blood cells, indicating a general deficiency. When they were given supplemental Coenzyme Q 10 and were instructed about oral hygiene (flossing !) their gum conditions could be reversed. It seems that periodontitis lowers the level of Coenzyme Q 10 and the repair of periodontal tissue requires efficient energy production.
Diabetics have a ten fold chance of having a Coenzyme Q 10 deficiency than healthy people and most oral hypoglycemic drugs further lower the Coenzyme Q 10 level as they interfere with the enzym's metabolism. When diabetics were given supplemental Coenzyme Q 10 for a period of 2 to 3 weeks, their fasting blood sugar level dropped by 20 to 30 % in two thirds of the patients.
The tendency towards obesity can be attributed to a faulty metabolic activity in some cases. Some subjects with a family history of obesity show only half the thermogenic response to food than the average person. This suggests that there is a factor in obesity that is a result of poor energy production. Since Coenzyme Q 10 is an integral part of energy production on the cellular level, it is possible that a deficiency of this enzyme may play a role in some cases of obesity. When 27 very obese individuals were examined for a Coenzyme Q 10 deficiency, over 50 % or 14 of the 27 were found to be deficient. As a test, 5 subjects with low levels of the enzyme and a control group of 4 people with normal enzyme levels were given 100 mg of Coenzyme Q 10 daily together with a calorie restricted diet. After nine weeks the mean weight loss for the initially deficient group was 13.5 kg compared to a weight loss of only 5.8 kg in the control group.
In addition, Coenzyme Q 10 is an effective anti oxidant and increases the ability of the immune system to fight off infections by increasing the germ killing ability of macrophages.

When it comes to choosing a CoQ10 supplement, the primary factor is how many swallowed milligrams actually make it into your bloodstream. Coenzyme Q10 is a notoriously difficult nutrient to absorb. A recent study showed that in seriously ill patients, conventional ubiquinone CoQ10 was hardly detectable in the blood, whereas the new ubiquinol resulted in significant blood level increases and subsequent clinical improvements. Scientific studies show that ubiquinol remains in the blood far longer than ubiquinone. In studies measuring exercise-induced fatigue, ubiquinol was 90% more effective than ubiquinone. In middle-aged mice, ubiquinol was shown to be 40% more effective in slowing measurements of aging compared to ubiquinone.This enhanced ubiquinol formula also achieved a 66% greater amount of CoQ10 in blood over 24 hours compared to the original formula.

Individuals suspecting a deficiency and suffering from one of the above described diseases should take 100 to 150mg a day. Athletes can profit by taking 30 mg daily. Diabetics should closely monitor their fasting blood sugar.If you are taking any beta blockers or cholesterol lowering drugs, your minimum needs are 100 mg daily. People suffering from congestive heart disease have been shown to improve with doses up to 1200 mg per day.

PrimaVie® is a registered trademark of Natreon, Inc.
Q+®, Kaneka Ubiquinol™, and the quality seal™ are registered or pending trademarks of Kaneka Corp.

To be determined Shipping
$0.00 Total

Product successfully added to your shopping cart
Quantity
Total
There are 0 items in your cart. There is 1 item in your cart.
Total products
Total shipping  To be determined
Total
Continue shopping Proceed to checkout
We do NOT use cookies. Visit our Privacy Policy for more information on our data collection practices.